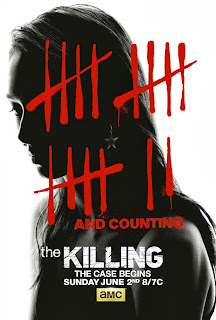 There has been much critical hate driven towards AMC’s The Killing in its first two seasons, and while the show’s second season was not good, a lot of that hate was undeserved.  So I was happy to see many critics and hate watchers quietly offer their mea culpas during the show’s third season (which aired this past summer and was something off a miracle as the show was “cancelled” last July).  Yet I oddly found myself not as won over as many with this past season.  This season had many high points and was able to find make something interesting out of every plotline, but it ultimately wasn’t as even as the show’s first season as it tried to juggle three major storylines that often felt adrift from one another.

The third season of The Killing followed Linden’s (Mireille Enos) return to the Seattle police force in order to help Holder (Joel Kinnaman) find the Pied Piper, a serial killer that preys on the homeless teenagers of Seattle.  As Linden gets closer to finding the killer she begins to realize that a man she once helped sentence to death (Peter Sarsgaard) may be innocent after all.  Veena Sud continued to run this series while the season was directed by a plethora of directors including Silence of the Lambs director Jonathan Demme.

This season is definitely a season of television that will play better on re-watch.  Many of the plotlines that felt so infuriatingly away from most of what else was going on in the show early on end up becoming important in the long run.  Other than a subplot involving a death row prison guard and his family life, many plotlines will reward the viewer better on second viewing.  The problem with this is the conclusion to the big mystery of the season is disappointing and poorly executed.  While the character work may be good (and Linden’s journey into the darkest point of her life truly is fascinating), it’s mixed in way too much with the mystery of the season to be worth it.  That being said, the good (and there is a lot of it with standout episodes such as “Reckoning” and “Six Minutes”) outweighs the weaker parts of this season.

The show’s cast also continues to get better.  Mireille Enos and Peter Sarsgaard give the two strongest performances of this new TV season.  Enos isn’t afraid to work with darker material for her character, and this is the first season where she has made me truly invested in her character.  Meanwhile, Sarsgaard delivers a performance for the ages in “Six Minutes” as he faces death in the face.  So while the writing for the character may be a bit murky at first, it clears up enough in time for Sarsgaard to reach his true potential.  Joel Kinnaman is also good, even if he doesn’t get the material he got in past seasons.  Amy Seimetz and (especially) Bex Taylor-Klaus do great work in supporting turns.

The third season of The Killing is a bit of the mess but it offers more good than bad and is a clear step up from its sophomore season.

7/10
at August 13, 2013
Email ThisBlogThis!Share to TwitterShare to FacebookShare to Pinterest
Labels: 2013 tv