Some thoughts on Lucky Guy 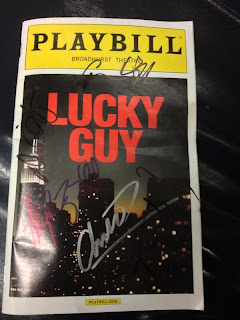 This is normally a blog for film and television, but I thought I would make a special case for the Tony Award-winning play, Lucky Guy.  The play has deep roots in film.  The play was written by the late Nora Ephron and it stars Tom Hanks.  The following will just be some of my thoughts instead of an actual review.
First of all, this play was a bit disappointing.  The play tells the story of real-life journalist Mike McAlary, but the play comes across as more of a “greatest hits” instead of an actual story.  So it is unsurprising that Nora Ephron is the only credited writer on the play.  The stuff Ephron writes isn’t bad.  Far from it in fact.  The characters are interesting and this is nothing like anything Ephron has done before.  It’s just that there is a lot of connective tissue missing here and the whole play feels disjointed because of that.  I understand the need to respect Ephron’s work, but a little rewrite could have done wonders for this play.
That being said this will be Tom Hanks’ greatest chance at a third Oscar if this is ever turned into a film (and I really hope it is as I think the story can translate better on the screen than it did on the stage).  Hanks is playing against type and really excels at it.  It also helps that the second-half of the play deals with him trying to work past his cancer and that he gets a killer monologue towards the end of the play.
Lucky Guy has a distinctively New York feel so that will need to be kept for the film.  Obviously, that presents a problem with Hanks being known as an LA guy but he did such a great job in the play that I can’t see anyone else doing it in a potential film.  The same applies to Courtney B. Vance who almost steals the show as one of McAlary’s bosses.  A potential film would obviously also need a rewrite for it to be a success.  Who should do that rewrite? I don’t know.  Aaron Sorkin would overpower Nora Ephron’s work.  Tracy Letts is an interesting choice (he did end up beating Hanks for the Tony award this year), but I don’t know if he would be able to capture the New York atmosphere that is so integral to this play.
Anyway, this is a play with a fantastic cast trying to overcome a script that was a draft or two away from being truly complete.  I don’t know if I would recommend it but there is so much potential in it that I really hope that we see a big screen adaptation of it.
at June 26, 2013
Email ThisBlogThis!Share to TwitterShare to FacebookShare to Pinterest