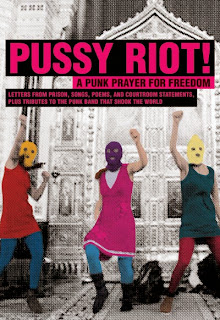 HBO’s Summer Documentary is the biggest unsung gem on television.  In a time where most of television takes a break for reality TV, HBO’s endorsement of a genre that barely gets any attention on television is nice to see.  It also helps that most of the additions in this series are well crafted and interesting.  The new season started up this past Monday with Pussy Riot: A Punk Prayer.  As someone who barely paid attention to the Pussy Riot Scandal, I found this documentary to be an interesting and informative introduction.  While the film’s clear one-sidedness may cause problems when the film decides to take a more ambitious approach, there is still a lot to admire about this documentary.

Pussy Riot: A Punk Prayer follows the creation of Pussy Riot, a band that is trying to protest the Russian government’s relationship with the Orthodox church through loud music displays in public places, through interviews with the three known members and their families.  After the three known members of the band are arrested for playing in one of the most sacred Orthodox churches in the country, the film then begins to follow their trial.  The film also explores what is the best way to handle the relationship between any government and religion through the ways in which Russians are handling their current situation.  The film is directed by Mike Lerner (the Oscar nominated documentarian behind Hell and Back Again) and Maxim Pozdorovkin.

Directors Mike Lerner and Maxim Pozdorovkin do a fantastic job of creating a story out of this real life event.  The way they tell a story with a purpose and then create characters (while the people portrayed in this documentary are real there are clear story arcs created for each of the three main girls) throughout the film is quite thrilling.  So much so that it is very easy to ignore a clearly biased perspective.  The only time at which you begin to question this bias is when the filmmakers try to explore the relationship between the Russian government and the Orthodox Church.  While any government should work as a separate entity from the country’s main religion, this film claims there is no separation of Church and State in Russia but provides little to no evidence.  Had the filmmakers provided some more evidence for this, it would have been much easier to go along with their more ambitious goals.

Pussy Riot: A Punk Prayer may not be one of the HBO’s Summer Documentary series’ best entries but it is a strong start to the new season.