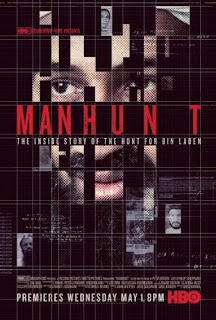 This past winter Kathryn Bigelow’s hunt for Osama bin Laden film, Zero Dark Thirty, was receiving a lot of buzz (both for its critical acclaim and the torture controversy surrounding the film).  So much so that it proved that there was only enough room for one hunt for bin Laden film on the market at the time as Manhunt (this time a documentary) made an under-the-radar debut at the Sundance Film Festival.  It had its television premiere on HBO this past Wednesday.  Ultimately, Manhunt is able to evade the trashiness of Seal Team Six: The Raid on Osama Bin Laden but isn’t able to rise to the heights of Kathryn Bigelow’s Academy Award winning thriller.

Manhunt follows the CIA’s decades long hunt for Osama bin Laden with special focus on a group of women who focused on the man before the attacks on 9/11.  The film is directed by documentarian Greg Barker.

It is difficult to not make comparisons between this film and Zero Dark Thirty.  Both cover most of the same ground and even feature similar characters.  However, the difference between the two is that Zero Dark Thirty is a sharply edited thriller interested in making a compelling story out of the hunt for Osama bin Laden whereas this film is a documentary interested with getting to the bottom of every single element of the hunt without having all of the information resulting in an oddly edited mess.

Manhunt is a much more wide-ranging film than it’s Oscar winning cousin as the starting point for Zero Dark Thirty is about halfway through this film.  However, with a film that is very interested in talking about how Osama bin Laden was captured it never actually really shows how he was captured.  The film opens with a shot of the now infamous compound in Abbottabad and explains how this film is going to show the entire process of capturing bin Laden.  Yet the film pretty much wraps it up with the death of Jennifer Matthews at the hands of an Al-Qaeda triple agent in what is the film’s most horrifying and effective sequence.  Missing almost completely is how the CIA was able to get to the courier and then to bin Laden.

Manhunt is a seemingly well-made documentary.  However, all the CIA talking heads and ominous footage of actual terrorist attacks and propaganda can’t hide the fact that this is a film that laid out its thesis clearly and then didn’t deliver on it.

5/10
at May 04, 2013
Email ThisBlogThis!Share to TwitterShare to FacebookShare to Pinterest
Labels: 2013 tv