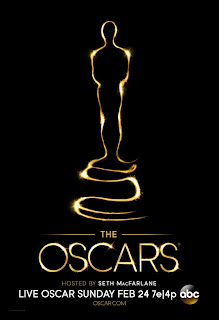 All good things must come to an end and one of the most exciting Oscar seasons in history will end this Sunday with the final ceremony.  With so much still up in the air (including a lot of major categories) here are my best guesses as to what will bring home an Oscar (if I don't write commentary for a category it's because the predicted winner is a lock or there hasn't been any change in momentum within the category).

With no Ben Affleck, this might be the most interesting category in Academy Award history.  Lee, David O. Russell, Steven Spielberg and Michael Haneke all have a chance at winning.  With a fading Spielberg and no immediate need to reward him a third directing Oscar, Lee would seem to be the favorite as he has gotten nominations at all of the major precursors (something his competitors can't claim).  However, Russell has been campaigning like a mad man and the Academy loves his film while Haneke's Amour seems to be picking up steam at the right time.  I think Russell's campaigning turns off enough voters to prevent a win and I think Amour peaked a week or two too early as its already showing chinks in the armor with a loss for Best Original Screenplay to Django Unchained at the BAFTAS.  They are still in the hunt though.

**Update 2/20 9pm** I have been saying all along that Russell is someone to look out for in this category.  I have decided that I might as well put my money where my mouth is.

This is Lawrence vs. Emmanuelle Riva.  Riva seemingly has all the buzz at the moment, but Lawrence has Oscar whisperer Harvey Weinstein in her favor (and she has done just fine with the precursors having won the SAG and Golden Globe).  I think the love for Silver Linings Playbook will push Lawrence over the edge as Riva's Amour can be too tough to watch for some (Remember: despite both films overachieving with nominations, the nominations process favors passion while the winner process favors consensus.  Amour is a film of the former and Silver Linings Playbook is a film of the latter).

Tommy Lee Jones may have won the SAG but he has faded drastically.  This is a two-horse race between Waltz and Robert De Niro.  Both actors seem to be peaking at the right time, but Waltz has a Golden Globe and BAFTA while De Niro has nothing.

Silver Linings Playbook pulled off a surprise by winning BAFTA but Argo quickly recovered with a WGA victory.  With this being one of the very few places where voters can reward the film in addition to Best Picture, Argo has to be considered the favorite.

There has been a lot of talk about Amour quickly gaining favor with the Academy, but the film that is really peaking at the right time is Django Unchained.  It started off by being a box office success (shockingly beating Les Miserables).  It continued on by securing a Best Picture nomination that was not assured at all.  It then won the screenplay award at the Globes against formidable competition like Lincoln, Argo and Silver Linings Playbook.  Then it had a big day at BAFTAs as it won for Best Original Screenplay and Best Supporting Actor.  All of this was done without being considered a major contender.  Now it seems like Harvey Weinstein is putting as much support behind this film as Silver Linings Playbook.  Expect this to be one of the categories where the Django Unchained surge makes itself evident.

With Brave being considered a "disappointment" it seemed like this was Wreck-It Ralph's to lose, but no one is talking about Wreck-It Ralph.  It just doesn't feel like an Oscar winner.  Meanwhile, Brave has quietly won the Golden Globe and BAFTA.

It's the most widely seen of the nominees so this is probably your winner.

BEST LIVE-ACTION SHORT=Death of a Shadow

Anna Karenina won the CDG and the BAFTA so it has positioned itself well against Les Miserables, which may garner some extra support from the strength of its Best Picture nominee status.  That being said Anna Karenina is liked enough (4 nominations in total) to win here.

Les Miserables has the most evident sound mixing out of the nominees so expect that to be a major influence on non-Sound Mixer voters on the category.  Life of Pi is a major possibility though.

Now onto what I have in store for the rest of Oscar week.  Friday I will be reviewing the Live Action Short Nominees, Inocente and probably A Royal Affair.  Saturday I will be releasing my List of Demands to Academy voters as well as a roundup of all of the reviews I have done for this year's nominees.  Sunday I will be attending an Oscars party so there will be nothing from me except the occasional tweet.  Monday will be my ceremony recap and next Wednesday will be my first attempt at predicting the 86th Academy Awards (next year's nominees).
at February 20, 2013
Email ThisBlogThis!Share to TwitterShare to FacebookShare to Pinterest
Labels: 85th Academy Awards