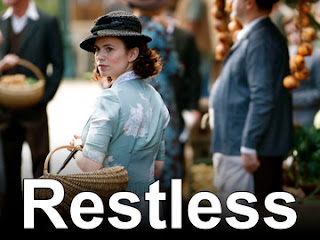 After it was announced that it would have a who’s who of British actors last year, I looked forward to Restless (the Sundance Channel’s latest miniseries) with great anticipation.  Fortunately, this miniseries is one that lives up to its pedigree.  With a plethora of strong performances (led by Captain: America: The First Avenger’s Hayley Atwell and including Charlotte Rampling in a SAG nominated role), Restless is able to overcome some scripting problems and turn itself into one of the best miniseries of the TV season so far.

Restless begins with Ruth (played by Downton Abbey’s Michelle Dockery) visiting her mother, Eva (Rampling).  Upon her arrival, Ruth begins to notice that Eva is acting odd.  Eva reveals her secret life as a young spy during World War II.  Flashbacks portray Eva (now played by Atwell) as a young Russian woman who is courted by British spies and slowly reveal what she is so afraid about in the present day.  The two-part miniseries is directed by Edward Hall (whose most prominent work to date was for Cinemax’s little seen Strike Back) and is written by William Boyd (Chaplin).

While this series certainly isn’t flashy and doesn’t display any sort of technical mastery (in fact the visual style is a bit bland), Edward Hall does some good work as director.  He is able to guide this miniseries through some troubling spots in a script that isn’t as successful as its direction.  There are just too many points (especially in the second installment) where this miniseries becomes a convoluted mess.  While the twists and turns in the later minutes of the miniseries are certainly interesting, they don’t warrant the amount of time spent on a plot that goes a little too far.  That being said the miniseries never feels overwhelming in terms of its plot.  Edward Hall makes sure the actors guide this series, and that was the best route for this miniseries.

Hayley Atwell is phenomenal as the younger version of the main character.  This miniseries has a very similar format to the 2011 film, The Debt, as it flashes back between the present and past with a troubled spy.  In both that film and this miniseries, the older actress (Charlotte Rampling in this miniseries and Helen Mirren in that film) has received the most attention, however, it is the younger actress (Atwell for this miniseries and Jessica Chastain for that film) that actually steals the show.  Atwell feels realistic as a younger version of Rampling, and she really proves herself to be an actress that deserves some lead roles in films rather than these miniseries.  Among the supporting cast, Michelle Dockery is the major highlight.  Stuck in the far less compelling present day storyline, Dockery holds her own with Rampling and really plays it well as a woman trying to come to grips with the insanity that has just entered her life.  Unfortunately, Rufus Sewell and (especially) Michael Gambon aren’t utilized so well.  Sewell always seems like a background character in every scene he is in despite being given ample opportunity to make an impression, while Gambon is just wasted and doesn’t even come into play until the closing seconds of the first installment.

Strong performances from the ladies of the cast make Restless rise above its generic direction and problematic script.

8/10
at January 29, 2013
Email ThisBlogThis!Share to TwitterShare to FacebookShare to Pinterest
Labels: 2013 tv