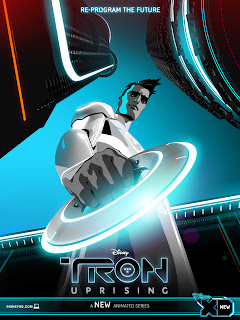 You may not have noticed but this past summer and fall in the darkest corners of your television in the middle of Friday nights Disney XD attempted to air a Tron: Legacy animated prequel series, Tron: Uprising.  Shocked?  Not surprising considering ratings were so bad that Disney XD was forced to move it around this way and that way to the point where there is no confirmation if it will ever air the remaining episodes that have been completed.  Since I don’t want to keep waiting for the series to finish (just in case it actually takes forever for the show to make a return to the air and I forget about it), I have decided to review the episodes that have aired.  That is a real shame because Tron: Uprising is one of the better animated series to come out in recent memory.

Tron: Uprising follows Beck (voiced by Elijah Wood), a program, as he sows the seeds of rebellion against Clu’s reign with the help of Tron (voiced by the actual actor of the part, Bruce Boxleitner).  The show was created by Lost and Once Upon a Time writers Edward Kitsis & Adam Horowitz who have since handed the reigns of the show to a talented director (Charlie Bean) and a solid group of more experienced animated program writers.

For a dramatic animated series, Kitsis and Horowitz and the writing team have created an engaging plot and some well developed characters.  Sure the writing gets cheesy at time but that comes with the territory.  The writing team does a fantastic job of giving each of its characters enough screen-time and have created an atmosphere that is frankly more interesting than either of the feature film installments in the Tron franchise.  A lot of that has to do with Charlie Bean’s direction.  It’s great to have a presence on a show like this that is always there (Bean has directed every episode), however, it’s even better than Bean really understands the material and has a complete command of it.

The most exciting part about this show though is that it has an A-list set of voice talents.  Elijah Wood voices the main character and Emmanuelle Chriqui does some surprisingly strong work as the voice of an antagonist.  It is also great to see the show get some of the actual talent from the films to do voice work here including Bruce Boxleitner and Olivia Wilde in a memorable guest appearance.  Even when they couldn’t get the actual talent from the films in the case of Clu, they found an uncanny replacement (Fred Tatasciore taking over for Jeff Bridges).

While some of the episodes can get a bit repetitive, Tron: Uprising is made with a lot of care and admiration for the Tron franchise.

8.5/10
at November 27, 2012
Email ThisBlogThis!Share to TwitterShare to FacebookShare to Pinterest
Labels: 2012 tv