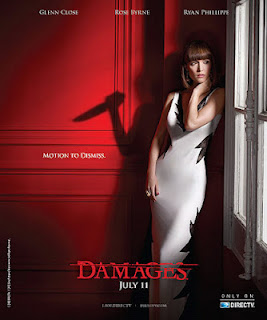 Being able to go out on your own terms is the greatest gift a television showrunner could receive.  It is also one of the most difficult gifts to take advantage of.  So coming off what might have been its best season yet, Glenn Kessler, Todd Kessler and Daniel Zelman (the showrunners behind Damages) had a lot to live up to if they were going to stick the landing on the final season of Damages.  Despite almost crashing the show multiple times during the course of the final season (something it seems many shows do nowadays), the powers that be successfully stuck the landing with a finale that was perfect for the series.

Season 5 of Damages picked up right where the last season left off: with Ellen Parsons (Rose Byrne) getting ready to be the lone witness against Patty Hewes (Glenn Close) in her custody case.  Unfortunately, Ellen must soon switch paths as Patty manipulates her into taking up a case involving a Julian Assange-like figure (played by Ryan Phillippe) and one of his whistleblowers (played by Jenna Elfman).

The Kessler brothers and Daniel Zelman found a highly suitable “case of the season” for season 4, so it was disappointing that the “case of the season” for season 5 was quit lackluster.  A case surrounding the management staff of a whistleblower website should have been very intriguing, but instead the plot behind the “case of the season” was filled with cliché plot advancements and a group of actors (with one exception) that couldn’t handle the material they were given.  It also didn’t help that the real Patty-Ellen showdown that the show was beating around the bush with this plotline was much more interesting.

That being said when the “case of the season” was all cleared up by the series finale, things really started to move.  The Patty-Ellen showdown lived up to the immense hype the show put on it.  The show also found the perfect ending.  It gave Patty an iconic ending, while it gave Ellen a much-needed happy ending.  The show also found the right amount of things to leave up to interpretation.

After getting a trio of phenomenal performances out of John Goodman, Dylan Baker and Chris Messina last season, the show really struggled to find a single good performance out of its supporting cast this time around.  Ryan Phillippe was terribly miscast, and quickly became annoying as the main person under investigation.  Jenna Elfman never really got her fair share of character development, while Janet McTeer ultimately was not used enough in what should have been a killer storyline.  Even Chris Messina felt off this season in a storyline that felt way too forced.  The one saving grace of the newcomers was John Hannah who makes the most of his increased screen-time in the later half of the season.

However, being the last season and all, this season was really going to come down to whether Glenn Close and Rose Byrne could pull off the material.  Unsurprisingly, the answer was a resounding yes.  Rose Byrne was given a workload that matched her work in the early seasons of the series.  She made the most of her emotional scenes and played well off of everybody in the cast, especially Glenn Close.  However, this show has always really belonged to Glenn Close and she proved that once and for all in the series finale.  Close’s work in the finale is a performance for the ages (if she gets nominated next year at the Emmy’s, there is no way she loses with the finale as her tape).  Ambiguous yet mesmerizing, Close’s performance as Patty Hewes will be a difficult one to forget.

While it hit many bumps on the way, season 5 of Damages concludes the legal thriller in an ultimately satisfying way.

7/10
at September 19, 2012
Email ThisBlogThis!Share to TwitterShare to FacebookShare to Pinterest
Labels: 2012 tv