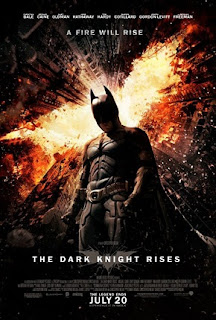 The amount of filmmakers who have pulled off a cinematic trilogy that is great from beginning to end is very few.  In fact, I would argue that the only filmmaker to do so is Peter Jackson (George Lucas doesn’t count as he didn’t direct the Star Wars original trilogy sequels).  It seemed like Christopher Nolan would be destined to be added to that list with the conclusion to his Batman trilogy, The Dark Knight Rises.  However, that is not to be the case as The Dark Knight Rises is easily the weak link of Nolan’s Batman trilogy.  While epic throughout, The Dark Knight Rises just has too much unnecessary exposition, poor characterization and some bad pacing in spots to be considered great.
The Dark Knight Rises takes place 8 years after Batman took the fall for Harvey Dent’s murders.  Since then Bruce Wayne (Christian Bale) has dropped the cowl and has lived as a recluse in the rebuilt Wayne Manor.  With no intention of returning to his former life as a vigilante, it will take a cat burglar (Anne Hathaway) and a physical powerhouse (Tom Hardy) to get him back to protecting the streets of Gotham.  Christopher Nolan directed and wrote the script (with help from his brother Jonathan and David S. Goyer) for this film.  Nolan’s direction is, as always, top notch.  The action scenes are well crafted (for the most part) and there are his usual creative choices that make his films so unique (I think my favorite of these is his choice to mute the score during the first Batman-Bane fight as it appears all the more brutal for it).  He even crafts a final act that is worthy of the entire series.  However, one thing that is missing here that Nolan is normally extremely good at is pacing.  The first few sequences zip by but everything from the latter half of the first act to the last scene of the second act suffer from some poor pacing.
The film’s biggest problem is its script.  First of all, the villains’ big plan in this film is so implausible that I’m somewhat let down that aliens didn’t show up at any point.  That’s a major problem when the film is striving for the realism that all of Nolan’s films do.  The script also suffers from trying to fit way too much into just one film.  There are so many interesting characters in this film but the script throws them in and out of the plot.  No character gets the amount of screen-time they deserve.
That being said the cast of this film is outstanding.  While I don’t think it is as complete of a performance as his work on Batman Begins, Christian Bale is solid as Batman/Bruce Wayne.  The film ends up becoming a Rocky-like story for the character and Bale is great going through the motions of the story.  The best turn from the supporting cast belongs to Tom Hardy.  The voice is not incomprehensible like it was during the prequel IMAX footage and actually becomes an interesting characteristic of the character.  Hardy is also able to show some great range with only his eyes appearing onscreen.
Despite being the most poorly written characters in the film, the women of the cast do really well.  Anne Hathaway steals the early portions of the film, and she could have given us the best Catwoman performance yet had the writing for the character not let her down in the second half.  Meanwhile, Marion Cotillard has what might be one of the worst written characters to appear in a ”legitimate” film in a long time, and yet it is jaw dropping what she is able to do with the role (especially with one important scene late in the film).  Let’s just say we will be in for a magnificent show if she is ever given a more meatier role of a similar nature to the one she played here.
Michael Caine, Morgan Freeman and Gary Oldman continue to give solid support, while Joseph Gordon-Levitt was also solid in what will likely be the most talked about role in the film.  The film also benefits from a bunch of cameos that will leave audiences smiling throughout.
Technically amazing and beautifully performed, The Dark Knight Rises was one good screenplay away from belonging on the same level as its predecessors.
8/10
at July 20, 2012
Email ThisBlogThis!Share to TwitterShare to FacebookShare to Pinterest
Labels: 2012 films