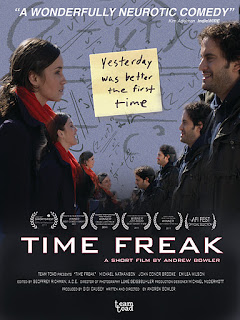 Time Freak is a lively and genuine short film that is very reminiscent of last year's live action short film Oscar winner, God of Love (an award that Time Freak has also been shortlisted for).  The film follows Stillman (played by Michael Nathanson) as he introduces his time travel machine to his friend (played by John Connor Brooke).

The great part about this film is that you know that you are in for a good time as soon as the opening credits begin to roll.  The credits themselves are a highlight of the film as they show glimpses of New York City intercut images of a quantum physicist's work.  The credits are a foreshadowing of the rest of the film as nothing is breaking new ground but all of it is done in an ingenious way.

Just look at the portrayal of time travel in the film.  Nothing jaw dropping is done with the format, but the originality of it is key.  Instead of pushing the concept to its limit, the film follows Stillman as he becomes preoccupied with fixing the things things in life (such as making the right impression on the girl he has a crush on) through time travel.  When you think about it, this is one of the more likely scenarios that would occur if time travel was possible, but films really haven't explored this side of time travel.  Andrew Bowler (who does double duty as director and writer) is due major credit here as he takes this original idea and sticks with it.  This allows the film to use a high concept structure without ever becoming confusing or tedious.

The real highlight of the short film is its technical prowess.  It's a very showy film as it is constantly jumping in time.  Geoffrey Richman steps up to the plate and does a phenomenal job of editing the film.    Following different strands of time can be very difficult, but not so here.  The visual effects (although sparse) are also expertly executed (especially during our first glimpse of how Stillman is able to time travel), and the film features a score that is subtle but suitably so.

With so much being done behind the scenes, it would seem the actors would be able to take a back seat.  However, each of the three main actors effectively grab the viewer's attention.  Michael Nathanson is a great fit for the character of Stillman.  I don't know who allowed Nathanson to mug it up for the camera, but it was a great choice as Nathanson is not only effective at it, but it contributes to the liveliness of the film.  John Conor Brooke is able to effectively play off of Nathanson and is a respectable "straight man".  The two have great chemistry together.  Emilea Wilson may have the most difficult role as she has to show why her character is so sought after with only a minute of screentime.  She is a success in the role.

Time Freak is completely enjoyable and there is a lot worse you can do with your ten minutes than watch this film.

8.5/10
at December 18, 2011
Email ThisBlogThis!Share to TwitterShare to FacebookShare to Pinterest
Labels: 2011 films