Summer movie season has finally begun and that can only mean crazy visual effects, obnoxious action sequences and cheesy dialogue, which (for better or worse) sums up Thor to a capitol T.  Thor has some admirable traits and many great parts.  However, it also has some shameful aspects (such as the atrocious 3D) and has a lot of trouble putting all of its interesting parts together.

Thor follows the titular character (Chris Hemsworth) who is a very arrogant prince of Asgard (the most important and fantastical kingdom in the universe).  However, his arrogance leads him to invade the home of the frost giants and destroys a truce between them and the Asgardians.  His father and ruler of Asgard, Odin (Anthony Hopkins), banishes him to Earth until he truly learns how to be a good king.  While he is gone, evil begins to stir in Asgard.

Thor is directed by ,of all people, Shakespearean actor Kenneth Branagh.  The film is written by Ashley Edward Miller, Zack Stentz (both Fringe writers) and Don Payne (The Simpsons).  Kenneth Branagh's direction of the film is only adequate.  He would definitely be the director I wold have chosen to film the project.  Unfortunately, the script does not help him at all.  Miller, Stentz and Payne's script follows every cliche ever written (a female lead that is in the film only to fall in love with the main character, a side kick character that doles out snappy one liners, etc).  Even worse the script never allows any of the characters to be in any real danger.  They give the characters unlimited power (even when they die they come back to life).  All tension is completely erased with this script.  Luckily, Branagh's expertise with Shakespeare allows the Asgard storyline (which has a lot of Shakespearean qualities and has the best relationship in the movie) to really standout.  Branagh does handle the Earth material so well. 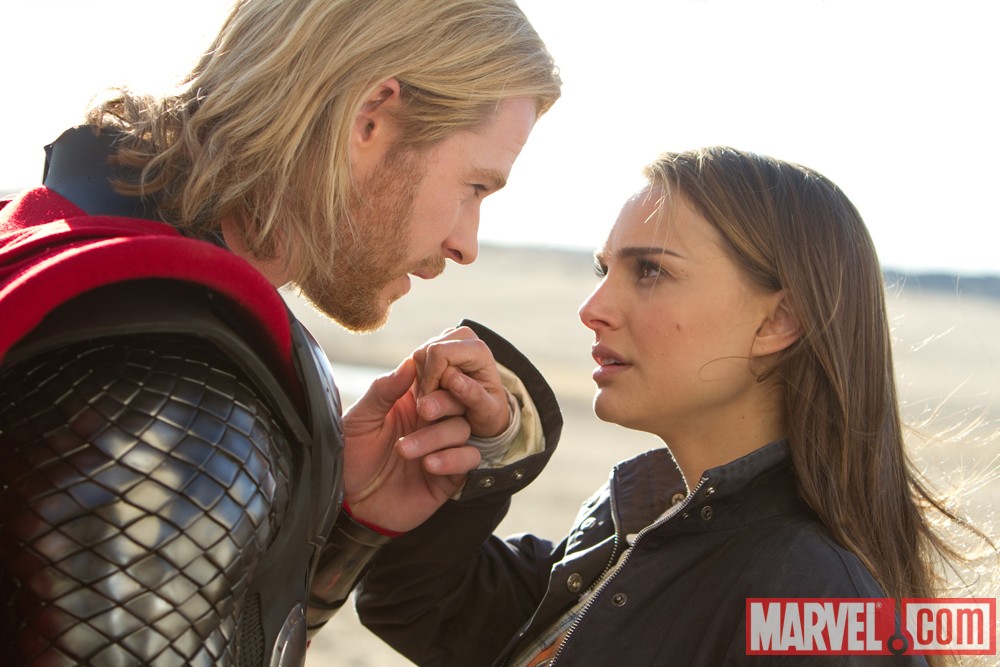 The acting in the film is a mixed bag.  Chris Hemsworth is indeed a star in the making.  This is a very similar performance to that of Chris Pine in Star Trek (Hemsworth actually played the father of Pine's character in that film).  He is able to handle all of the physical and emotional aspects of the character and he is also surprisingly able to handle the comedic aspects.  Hemsworth perfectly creates a larger than life character.  The second standout of the cast is Tom Hiddleston as Loki.  Hiddleston creates one of the better film villains in the past few years.  He makes Loki a creepy and scary figure, yet you still feel for pity for the character (despite many of his despicable actions).  He also has dynamite chemistry with Anthony Hopkins (definitely one of the best father-son relationships on screen in a while).  Natalie Portman, on the otherhand, does not seem like she is an Oscar winning actress.  This is probably her worst role ever.  She has no chemistry with Hemsworth and even worse she cannot handle the cheesy dialogue (many moments recall back the Star Wars days).  Portman is not given a good character to work with but as an Oscar winner she should be able to get past a poor script (something which Anthony Hopkins was able to do).  Stellan Skarsgard is good but is not given much in this film (although a scene after the credits suggests he may get some good material in The Avengers). The final major role belongs to Kat Dennings as Portman's snappy sidekick.  A lot of her comments during the film got big laughs form the audience.  I, on the otherhand, was scratching my head over what they found to be so funny.  Her delivery seemed to be off and her character is poorly written.  The one fun thing about the cast was the cameos.  Stan Lee has the best as a truck driver and it was great seeing Jeremy Renner as Hawkeye.

The behind the camera aspects of the film are also a mixed bag.  The art direction is very well done.  Asgard is a very interesting world as the art directors perfectly combine many medieval aspects with some sci-fi aspects.  What on paper reads as a cheesy and weird combination turns out to be the best part of the film.  There is nothing special about the aural and other visual components of the film.  However, I may not have the best opinion on the visual effects for the film.  They appeared to be very distorted and unrealistic, but that was due to the horrible 3D used for the film.  See this film in 2D.  This is the worst 3D I have ever seen (although I admit I did not see Clash of the Titans in 3D).

Thos is a film I very much wanted to like.  It has a great cast, it has an interesting choice for a director and it is setting up one of my most anticipated films of next year.  However, some horrible 3D, a lackluster script and a poor performance by Natalie Portman prevented me from truly liking it.

6/10
at May 19, 2011
Email ThisBlogThis!Share to TwitterShare to FacebookShare to Pinterest
Labels: 2011 tv