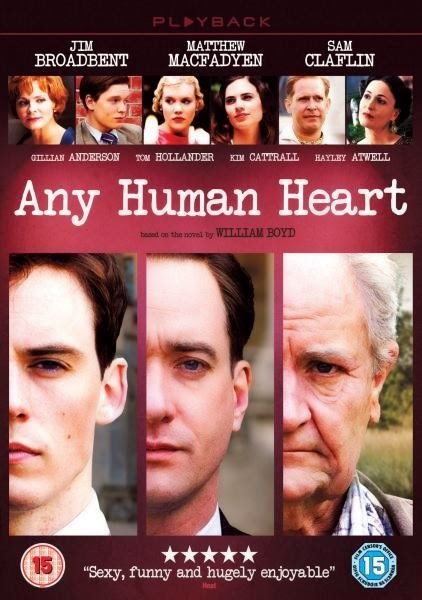 Any Human Heart is an enjoyable tale of literature during the 20th Century.  It doesn't strive to be anything more than a made for television biopic (even though it really is not a biopic as the main character is fictional) and yet, because it is perfect in this aspect, this miniseries does belong in a category above a made for television biopic (which are sometimes unfortunately frowned upon).  This miniseries is most definitely not a work of art to be frowned upon.

Any Human Heart follows the life of Logan Mountstuart an aspiring writer with great talent (and also not a real person despite many of the other characters of the miniseries being real).  Logan turns out to be a promiscuous, adventurous and easily distracted young man.  All of these characteristics make it interesting to see what happens after each and every hardship that is thrown at them.  The plot follows Logan through early 19th Century England, the Spanish Civil War, World War II and eventually to America.  The whole miniseries takes place from the older Logan looking back on his life and also to a reoccurring image of him as a young boy out on the ocean.

The series is directed by newcomer Michael Daniels but is luckily written by the author of the source material, William Boyd.  Boyd brings an important presence to the table as the series takes no time at all jumping into its quirky style.  If the miniseries were written by someone other than the author himself, I think they would have taken more time to adapt to the style (and, therefore, would have made the first act a lot harder to sit through).  There is a lot of confidence there too that wouldn't be there with another writer.  Boyd (and of course with a lot of help from the effective Daniels at the helm) is able to make you seriously believe in the main character even though he does not belong (and it probably would have felt cheesy without these two).

The acting in this miniseries is top notch.  It contains one of the best ensembles you will see in a television program all year.  Sam Claflin (Pillars of the Earth), Matthew Macfadyen (Pillars of the Earth...aren't you starting to see a theme here?), and Jim Broadbent (Another Year) are all very effective as the leads of the series.  Macfayden gets the most screen time as he gets to play the adult version of Logan (Claflin plays the teenage version and Broadbent plays the old version) and also gives the best performance.  His Logan is at time despicable and at others lovable.  Macfayden finds the perfect balance.  The supporting cast is large but there are two standouts that are worthy of everyone's attention.  First is Hayley Atwell (once again Pillars of the Earth).  Atwell is surely on the verge of becoming a star (after putting in the best performance in Pillars of the Earth over amazing veteran actors like Ian McShane and Donald Sutherland and about to be featured in the upcoming Captain America film) and she once again proves why.  In her first scene, she makes it easy to see why anyone would fall for her instantly (like Logan does) and has amazing chemistry with Macfayden.  If there were to be one shameful thing about this miniseries it would be that she has little screen time in the third act.  The second is Tom Hollander who gives a different interpretation of Edward, Duke of Windsor.  Guy Pearce was one of the best parts of The King's Speech playing the same character, and yet, Hollander gives just as good of a performance (if not better).  It is a much different interpretation as he is portrayed as much more of a villain here and Hollander really plays up the slime factor.

In terms of behind the camera aspects, you have your average qualities of a period miniseries with one major exception.  The cinematography is phenomenal.  There is some gorgeous scenery that is completely captured, some lingering shots that effectively make you question the symbolism, and sexiness brewing from every corner of the screen.

Any Human Heart easily could have been a disposable miniseries, but because of some great casting, phenomenal cinematography and a wise decision to have the author of the source material write the script, the miniseries rises above its potential.

8/10
at March 21, 2011
Email ThisBlogThis!Share to TwitterShare to FacebookShare to Pinterest
Labels: 2011 tv